Skip to main content
🎉 Check out highlights from GitHub 2022!

We analyzed more than 5,000,000,000 rows of GitHub event data and got the results here. In this report, you'll get interesting findings about open source software on GitHub in 2022, including: 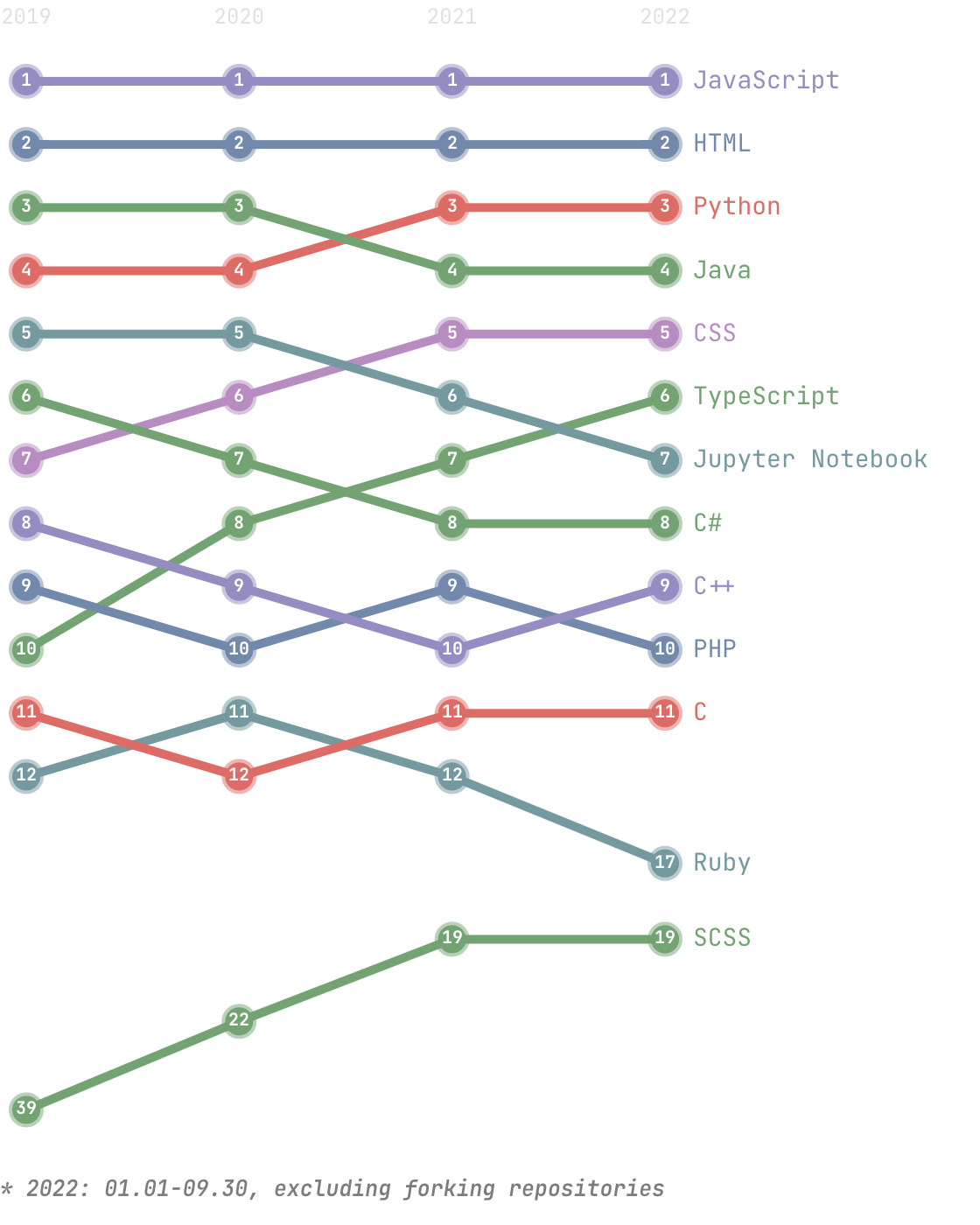 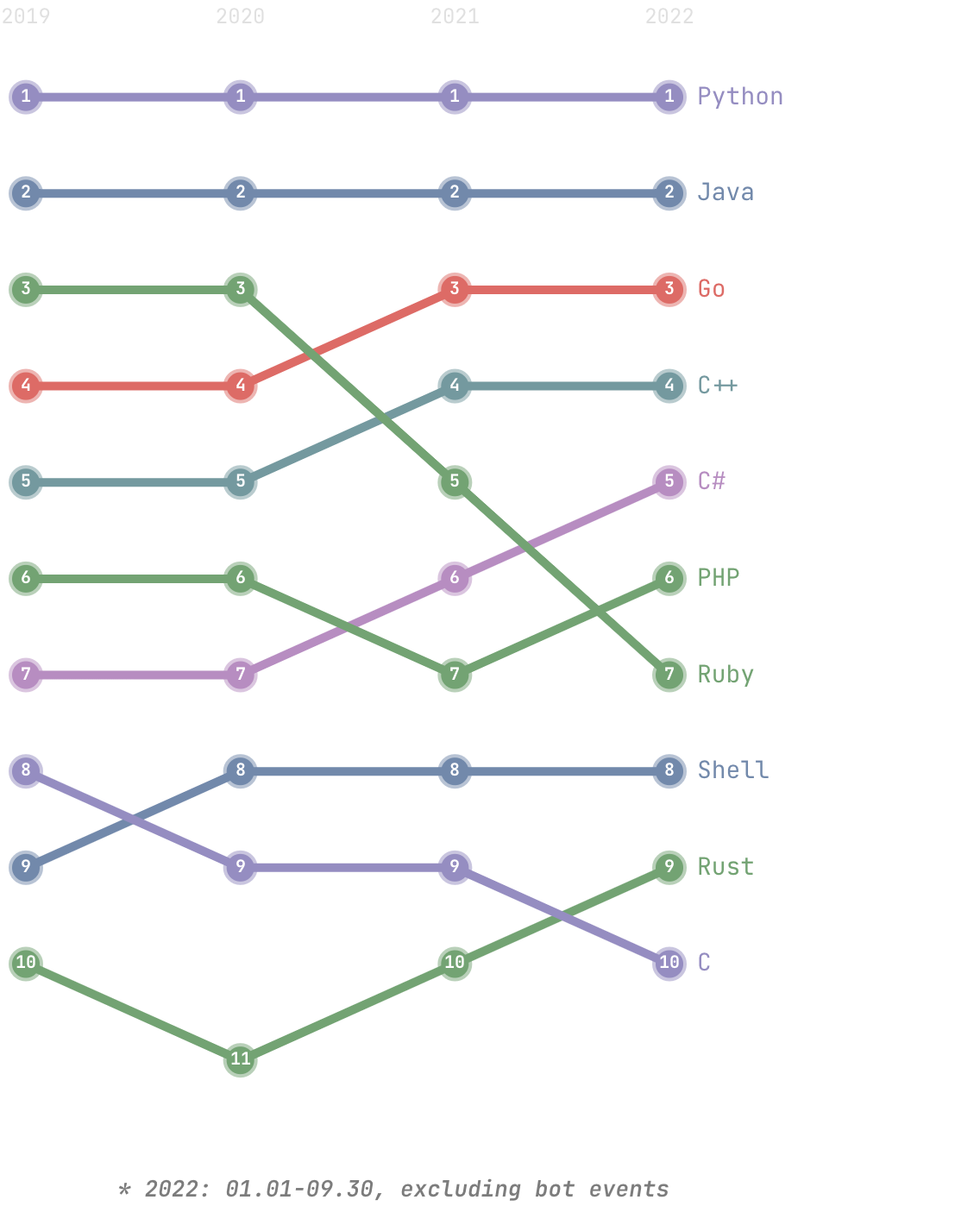 We queried the number of various events that occurred throughout the world from January 1 to September 30, 2022 and identified the top 10 countries by the number of events triggered by developers in these countries. The chart displays the proportion of each event type by country or region. 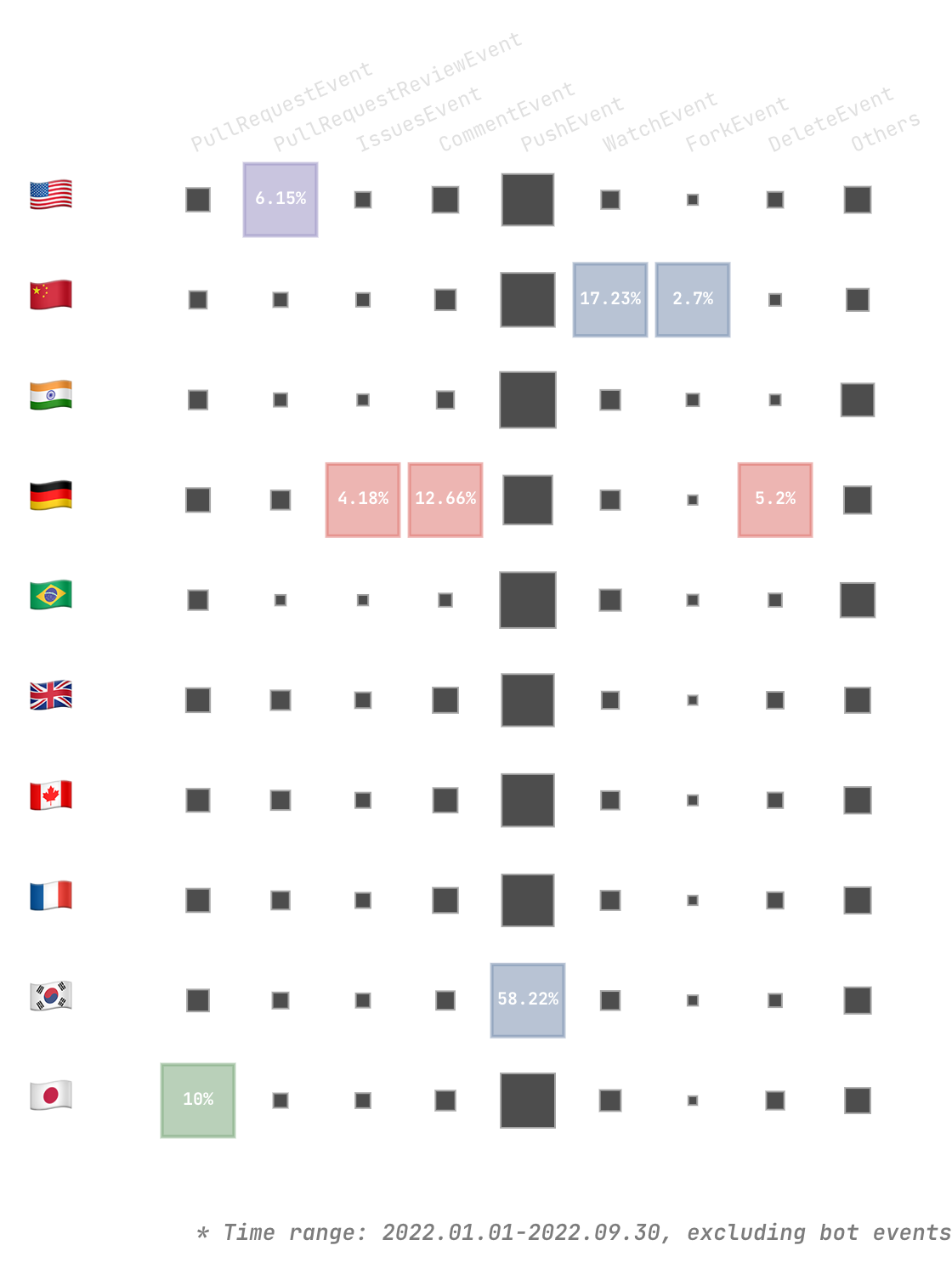 The chart shows that:

We queried the distribution of each event type over the seven days of the week. 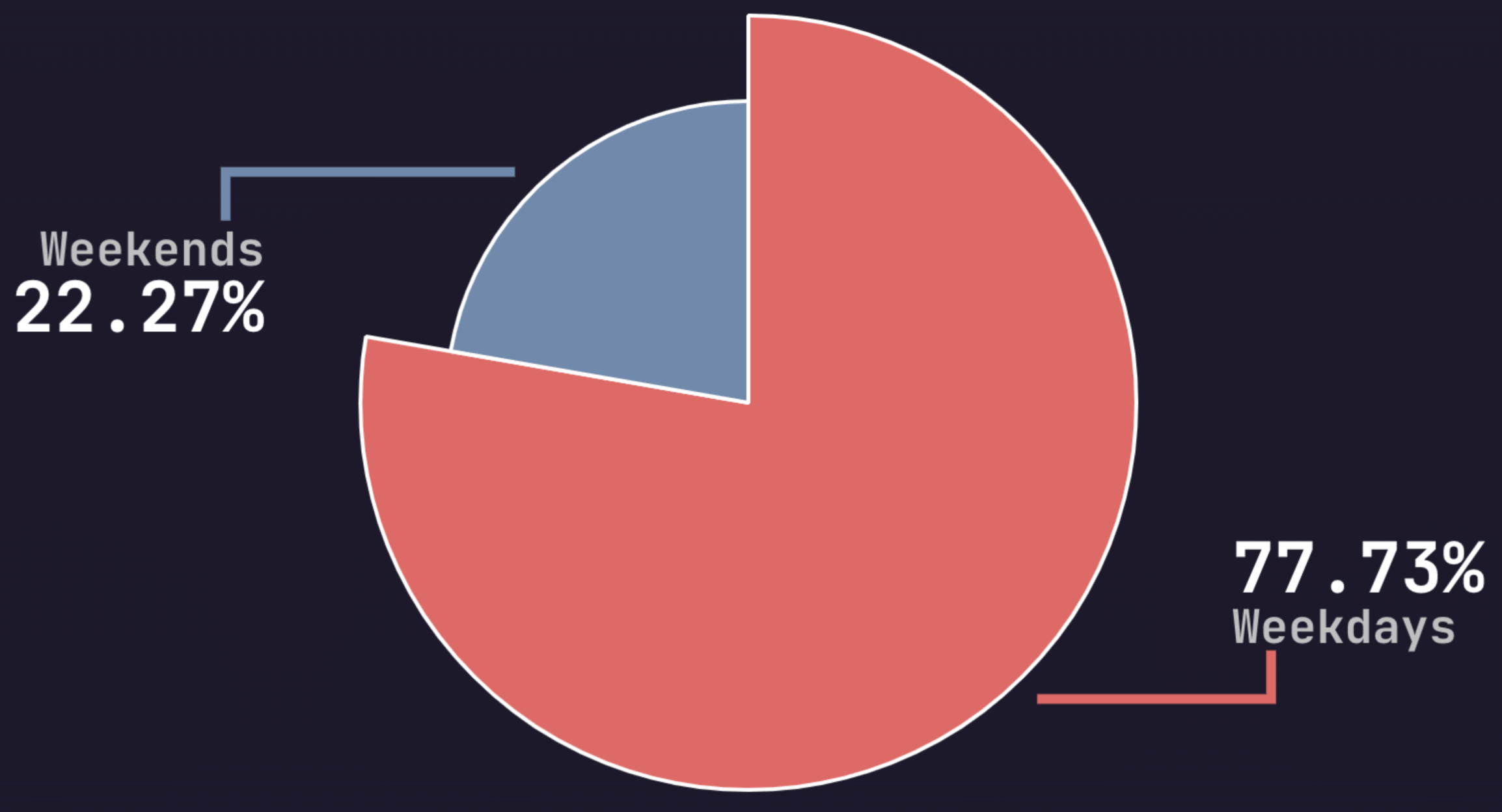 The distribution of specific events​ 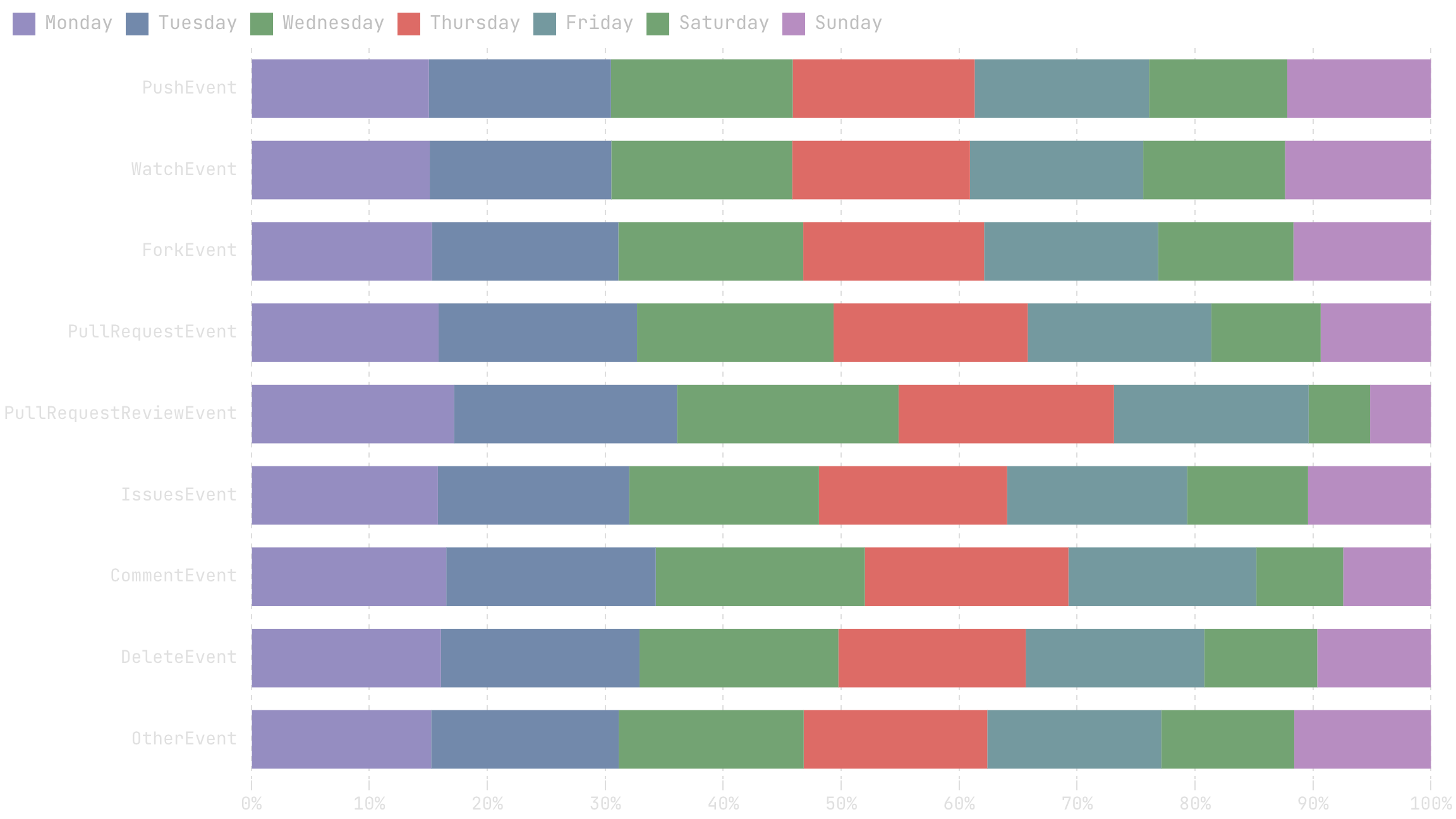 We queried the number of open source repositories associated with each technical area, as well as the percentage of active repositories in 2022. 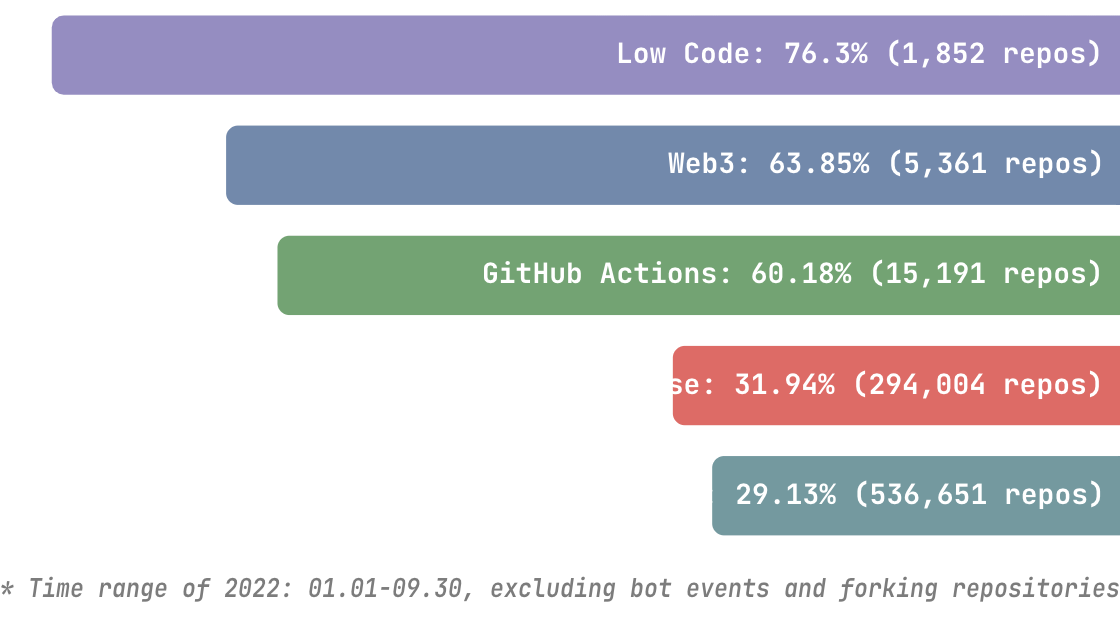 This figure shows that open source repositories in the Low Code topic are the most active, with 76.3% being active in 2022, followed by Web3 with 63.85%.

Popular topics over the years​

We queried the following items for each technical area from 2015 to 2022:

Then, we calculated the growth rate for each year which can reflect new entrants, developer engagement in this technical field, and the industry's interest in this area. For 2022, we compare its first nine months with the first nine months of 2021. 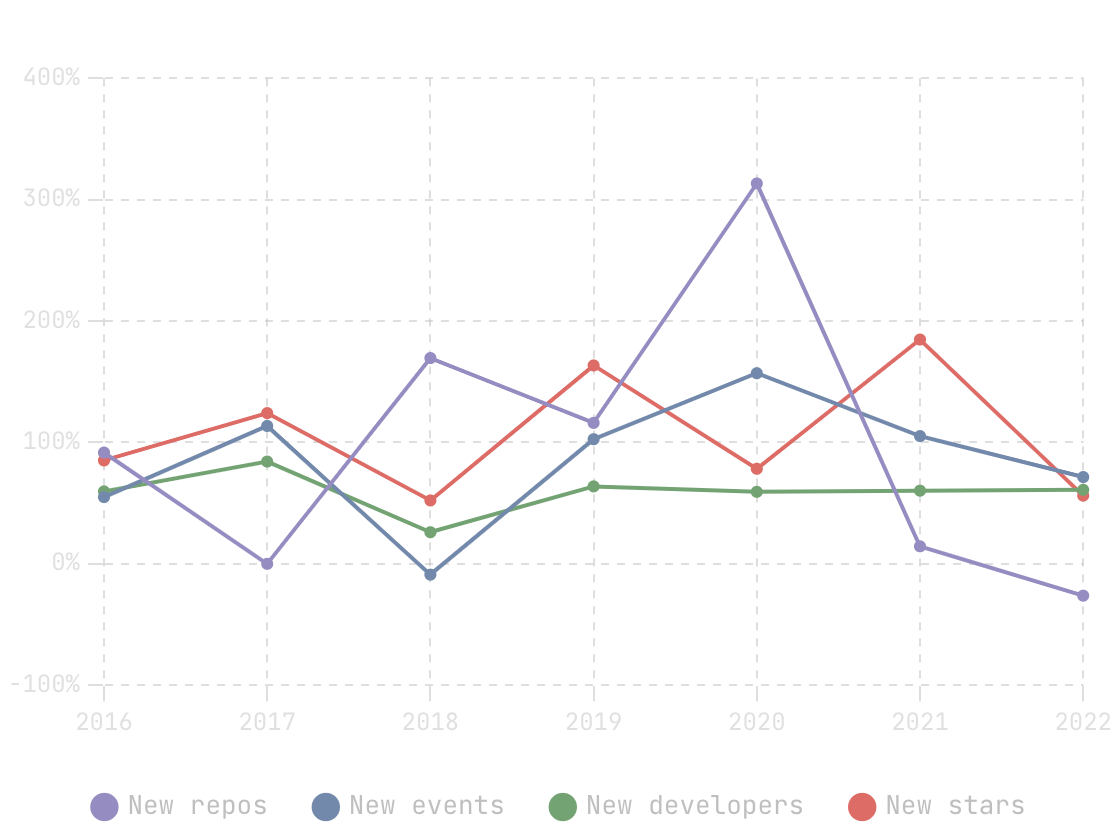 We can see that 2020 is the peak period of project development, with a 313.43% increase in new repositories and a 157.06% increase in developer collaborative events. The industry's interest increased most significantly in 2021, reaching 184.82%. In 2022, the year-on-year growth data shows that the number of new repositories decreased (-26.21%), but developer engagement and industry interest are still rising. 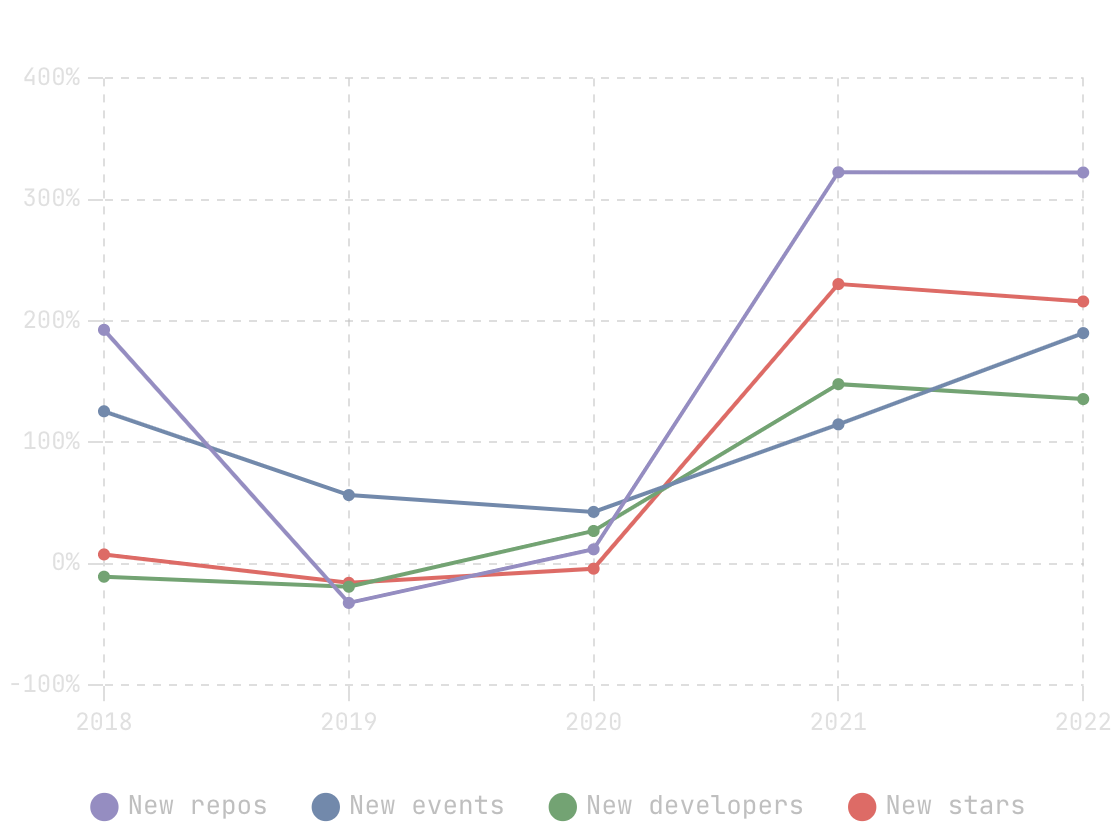 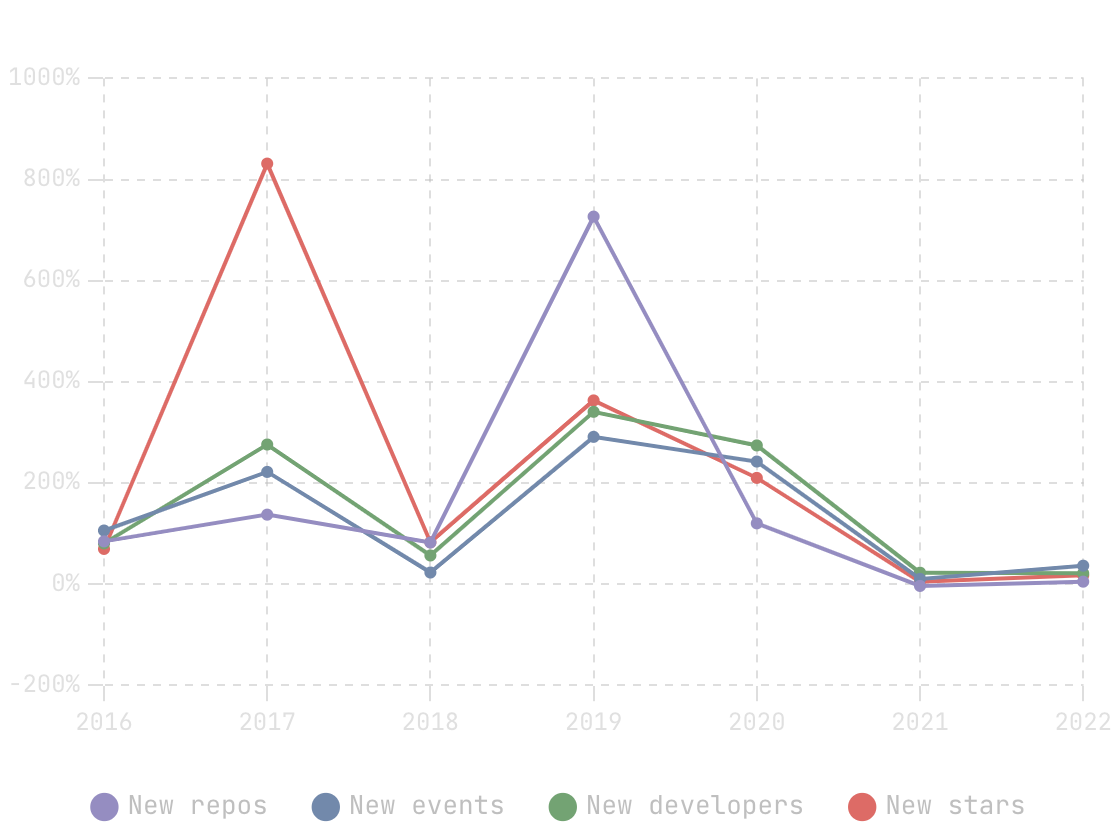 The annual increase of GitHub Actions repositories has been declining, but developer engagement and the industry's interest are still increasing slightly. 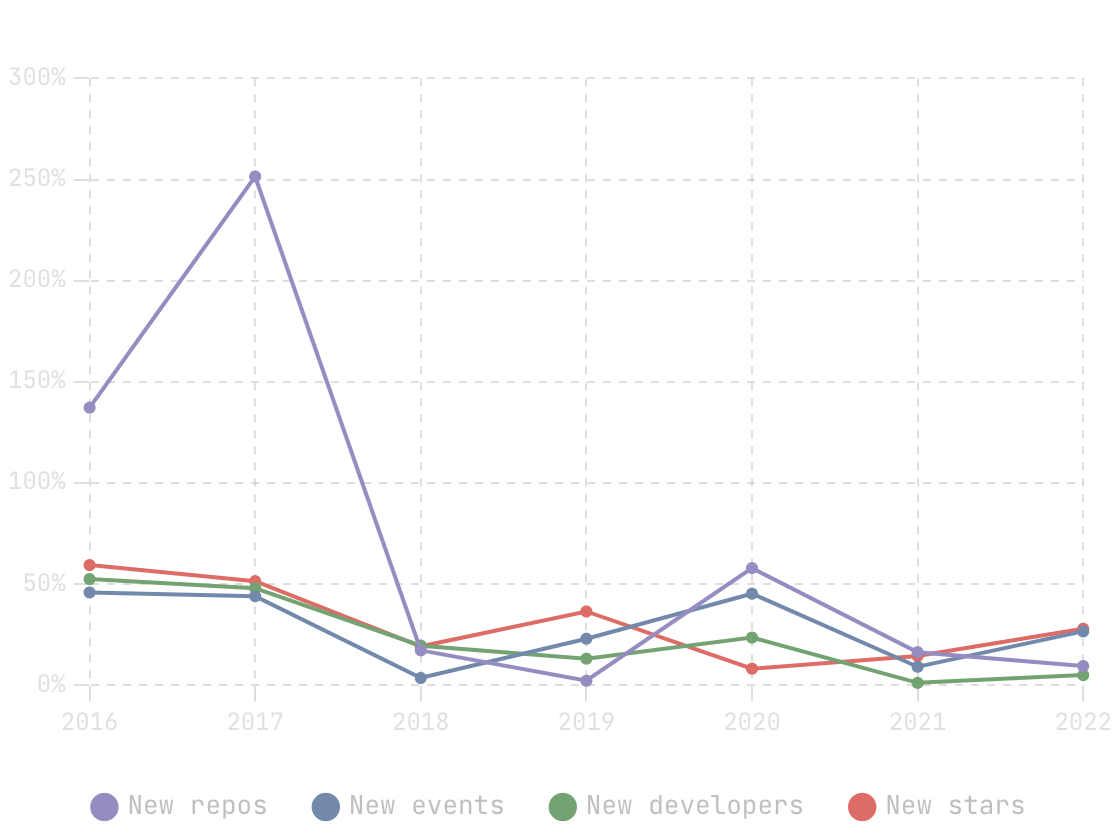 As an infrastructure project, the Database project's threshold is high. Compared with projects in other fields, a database project has a stable growth rate. 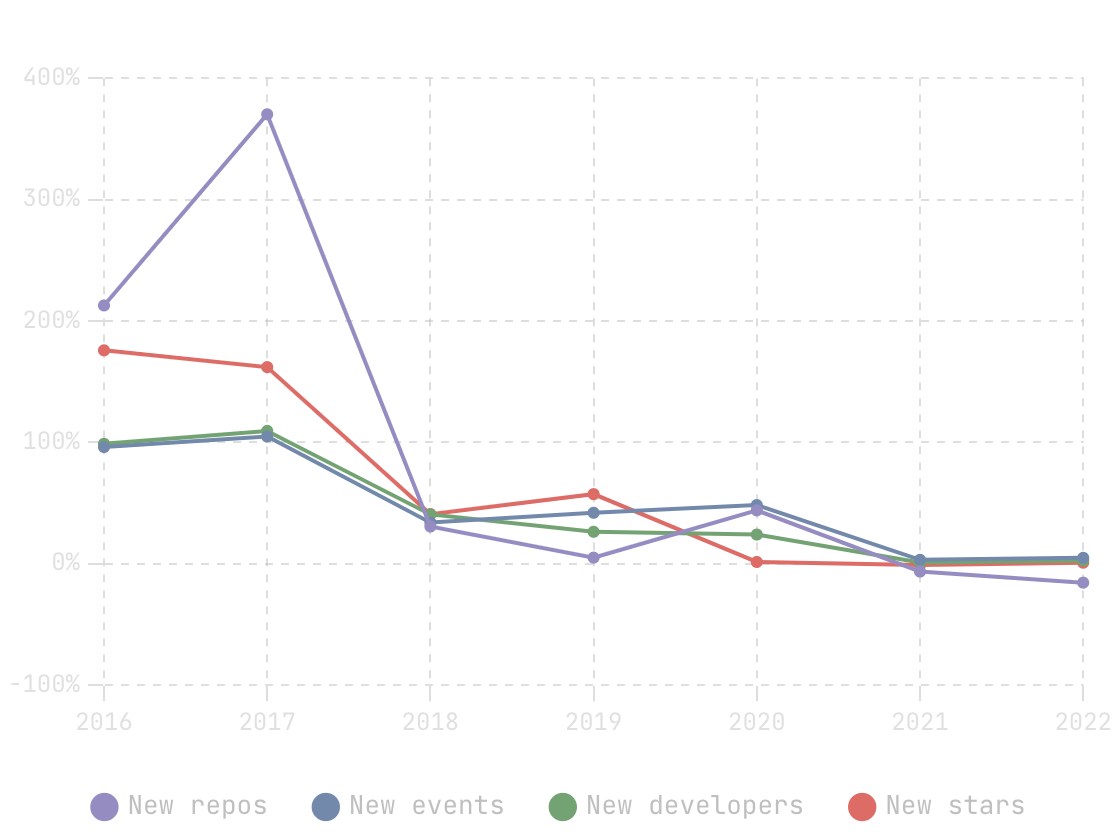 After two years of high growth in 2016 and 2017, open source projects in AI have been growing gradually slowly.

The most popular repositories in 2022​

The number of stars is the most visible indication of the popularity of open source projects. We looked at the 50 projects that received the most stars from January 1 to September 30, 2022. We found that: 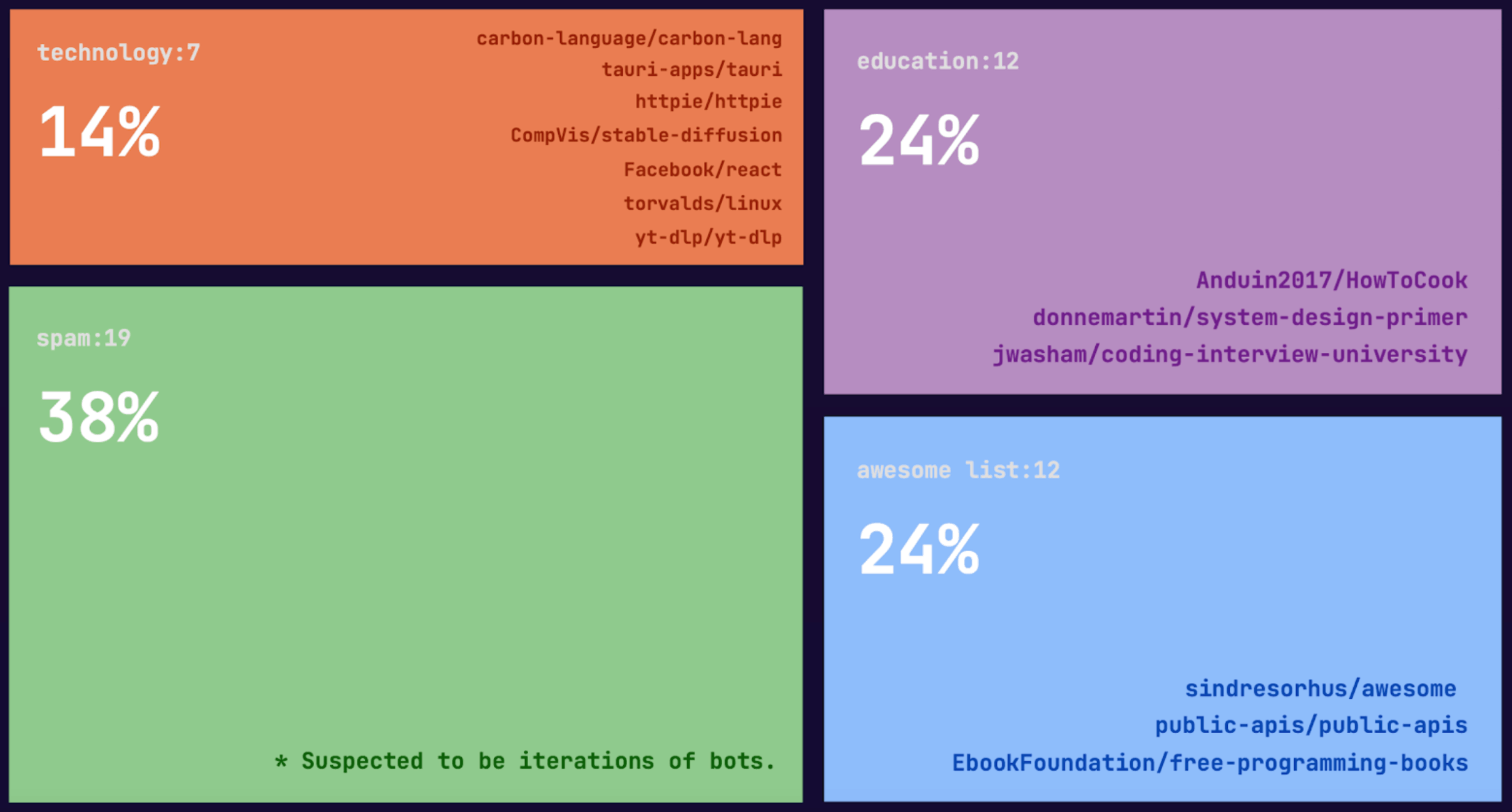 The most popular repositories in 2022

The most active repositories over the past four years​

Here we looked up the top 20 active repositories per year from 2019 to 2022 and counted the total number of listings per repository. The activity of the repository is ranked according to the number of developers participating in collaborative events.

We queried the developers who gave the most stars in 2022, took the top 20, and filtered out accounts of suspected bots. If a developer's number of star events divided by the number of starred repositories is equal to or greater than 2, we suspect this user to be a bot. 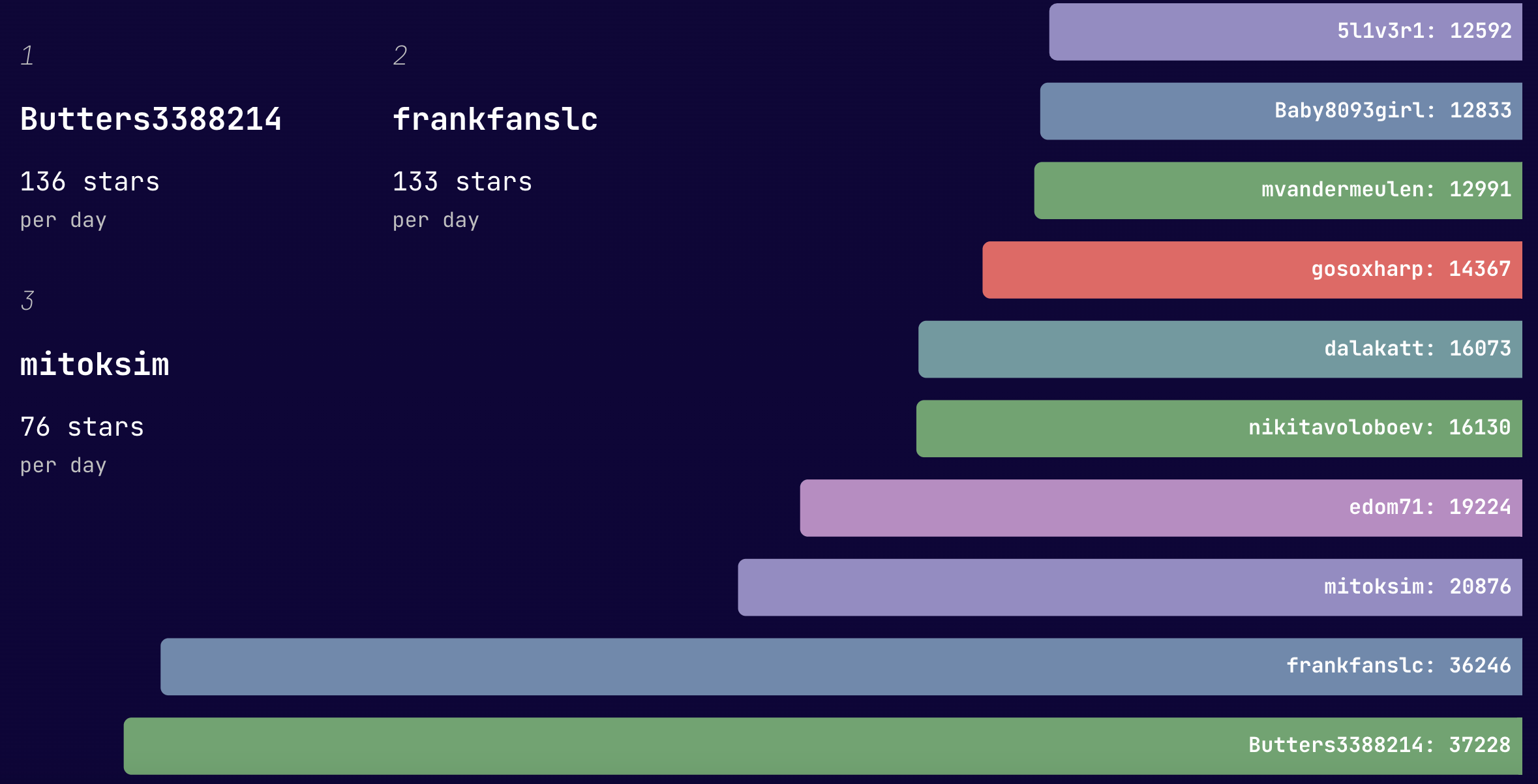 Developers who gave the most stars

We found that until September 30, 2022, the developer who starred the most repositories had starred a total of 37,228 repositories, an average of 136 repositories per day.

The most active developers since 2011​

We queried the top 20 most active developers per year since 2011. This time we didn't filter out bot events. 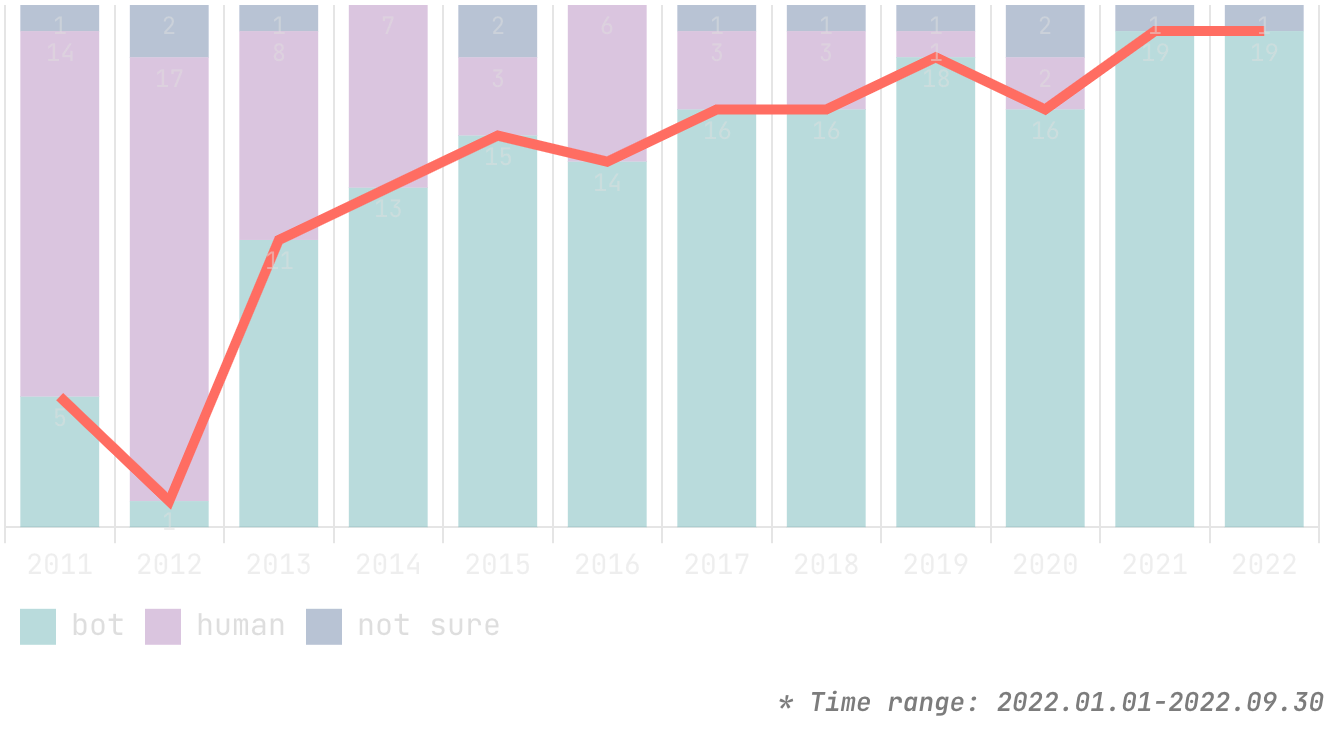 The most active developers

We found that the percentage of bots is becoming larger and larger. Bots started to overtake humans in 2013 and have reached over 95% in 2022.

How we classify technical fields by topics​

This post dives deeply into GitHub event trending, why GitHub events are surging, and whether GitHub's architecture can handle the increasing load.

The OSS Insight database includes all the GitHub events since 2011. When we plot the number of events by year, we can see that since 2018 they have been increasing rapidly. 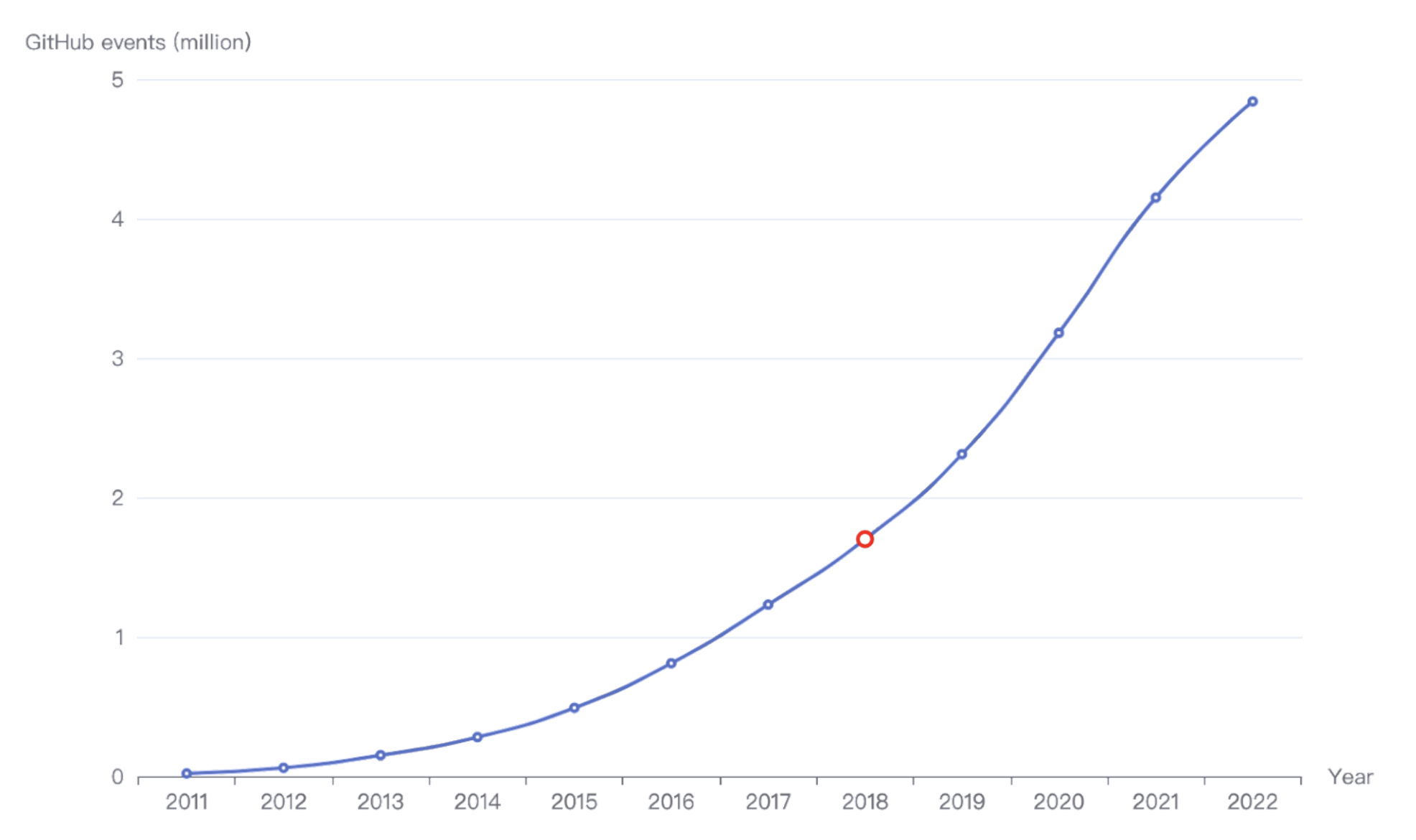 The figure below shows how long it takes to grow each billion events in GitHub. 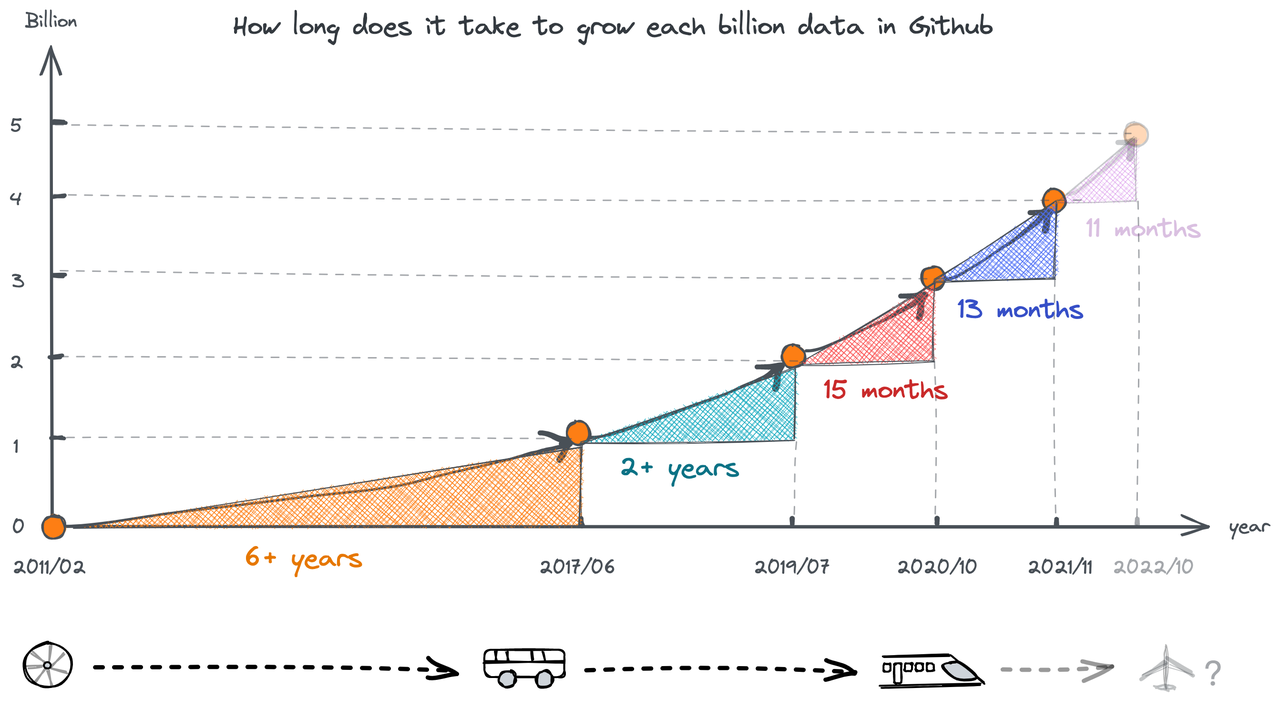 The time to reach a billion GitHub events

The secret behind the exponential growth of GitHub events​

GitHub Actions was released in October 2018. Since August 2019, it has supported continuous integration and continuous delivery (CI/CD), and it has been free for open source projects. Therefore, projects hosted on GitHub can automate their own development workflows, and a large number of automation-related bot applications have appeared on GitHub Marketplace. Could GitHub events' data growth be related to these? 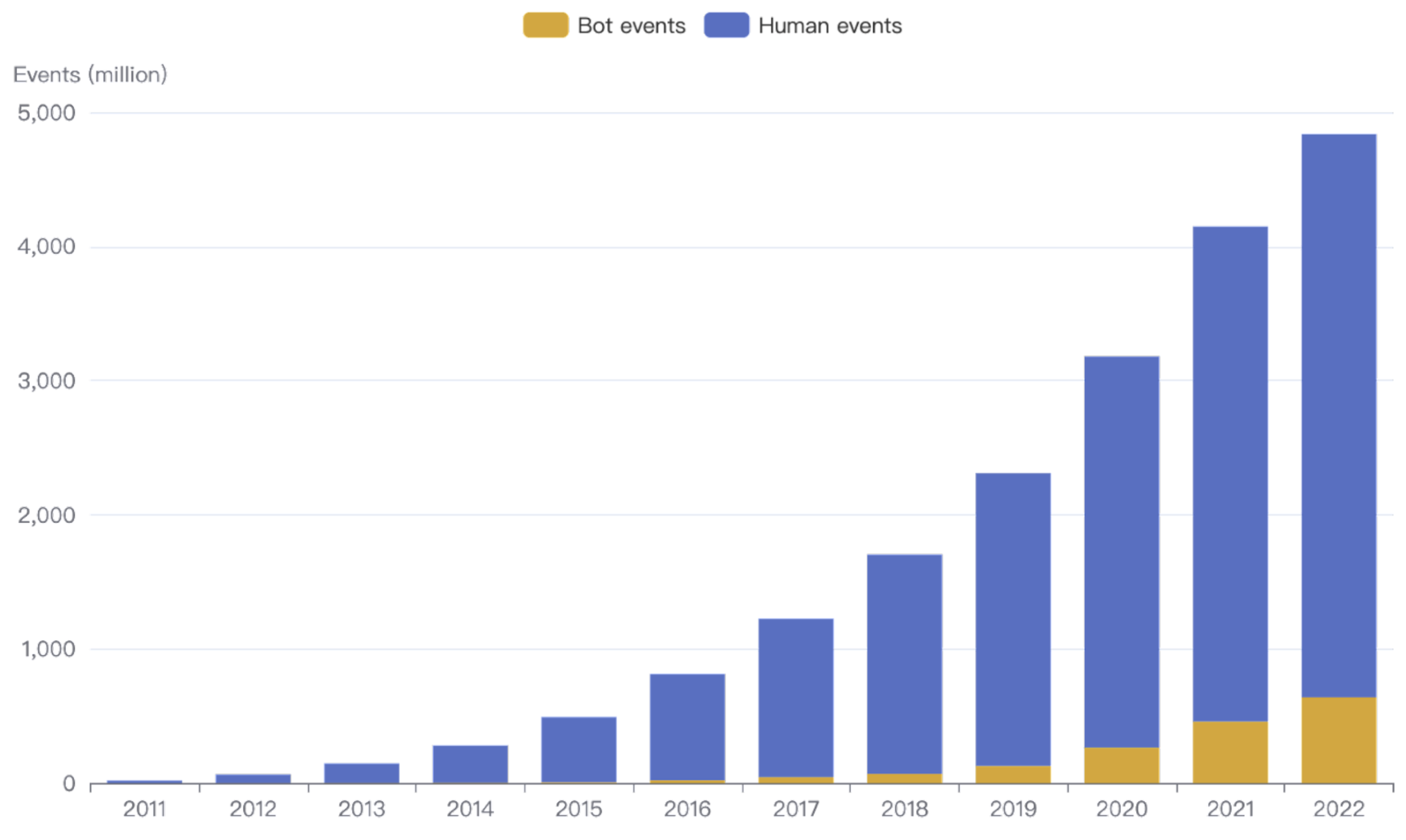 As you can see, the proportion of GitHub bot events has increased each year. In 2015, they were only 1.23% of all events. In early July of this year, they reached 13.2%. To show the data changes of bot events more clearly, we made the following line chart. 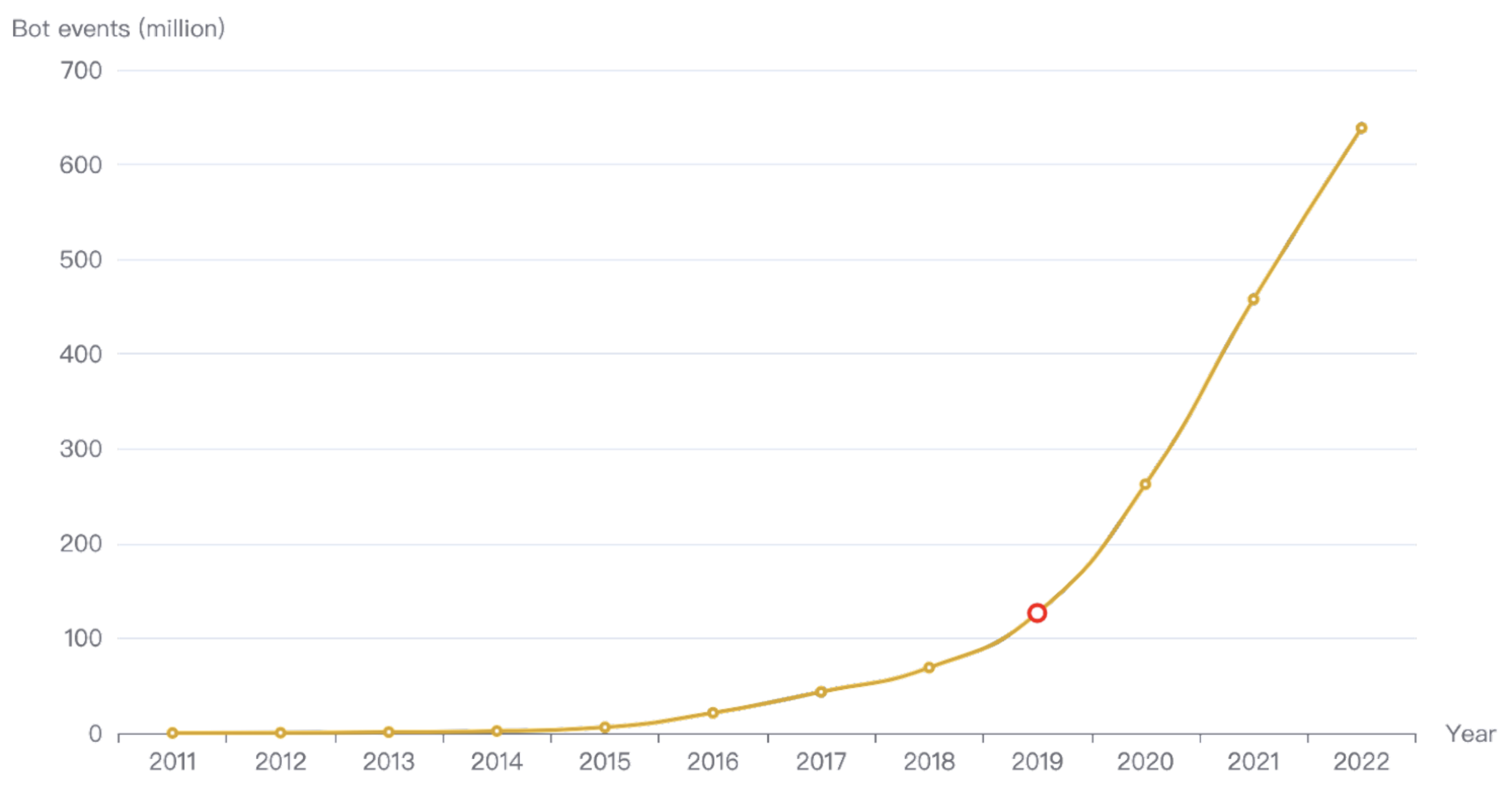 This figure shows that since 2019, bot events have been grown faster than before. As Mini256, a TiDB community contributor said in Love, Code, and Robot — Explore robots in the world of code:

For now, rough statistics find that there are more than 95,620 bots on GitHub. The number doesn't seem like so much, but wait...

These 95 thousand bot accounts generated 603 million events. These events account for 12.82% of all public events on GitHub, and these GitHub robots have served over 18 million open source repositories.

Bots are playing an increasingly important role on GitHub. Many projects are handing over automated work to bots. We expect that GitHub events will grow faster in the future.

When will GitHub reach 10 billion events?​

How many GitHub events will there be by the end of 2022? We fit predictions to GitHub historical data. 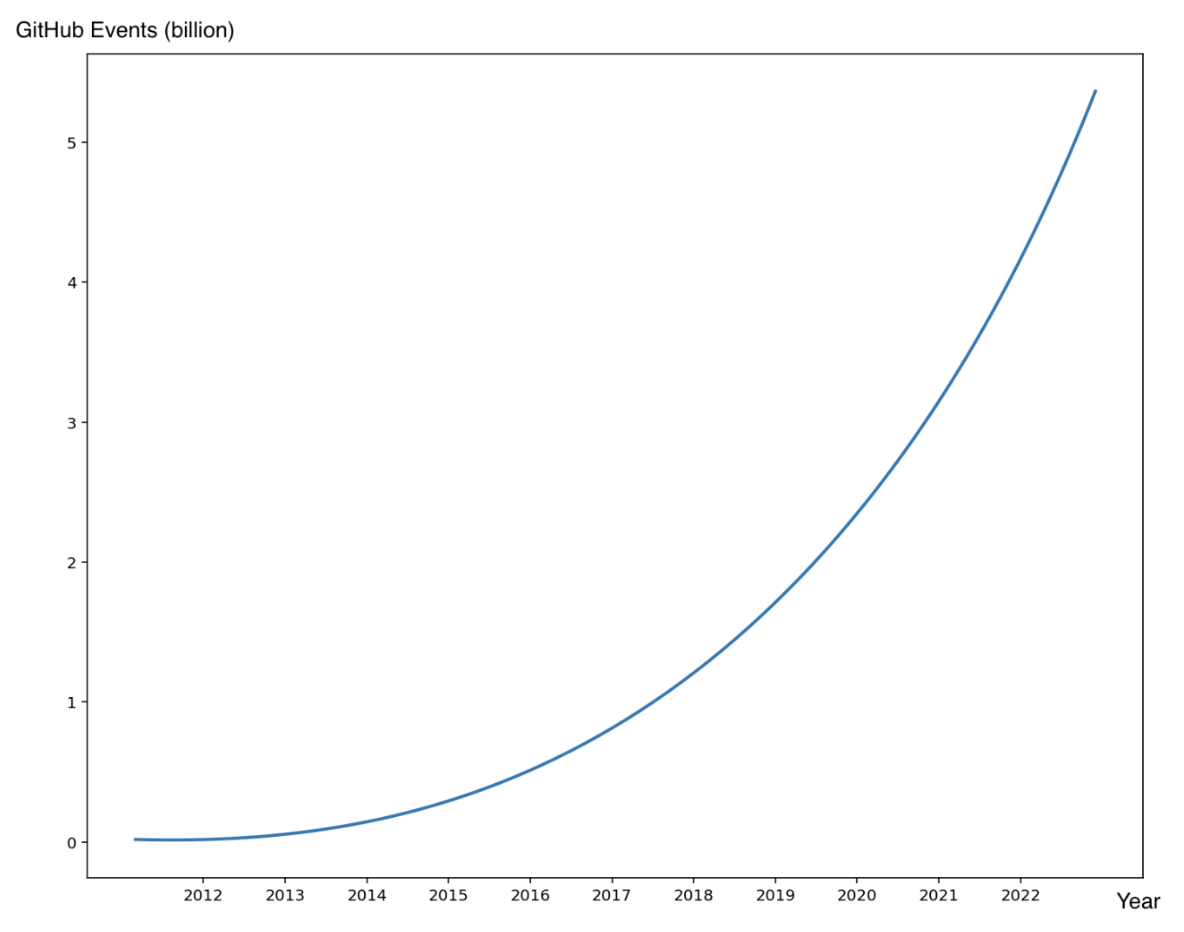 According to this prediction, GitHub events will exceed 10 billion in February 2025. 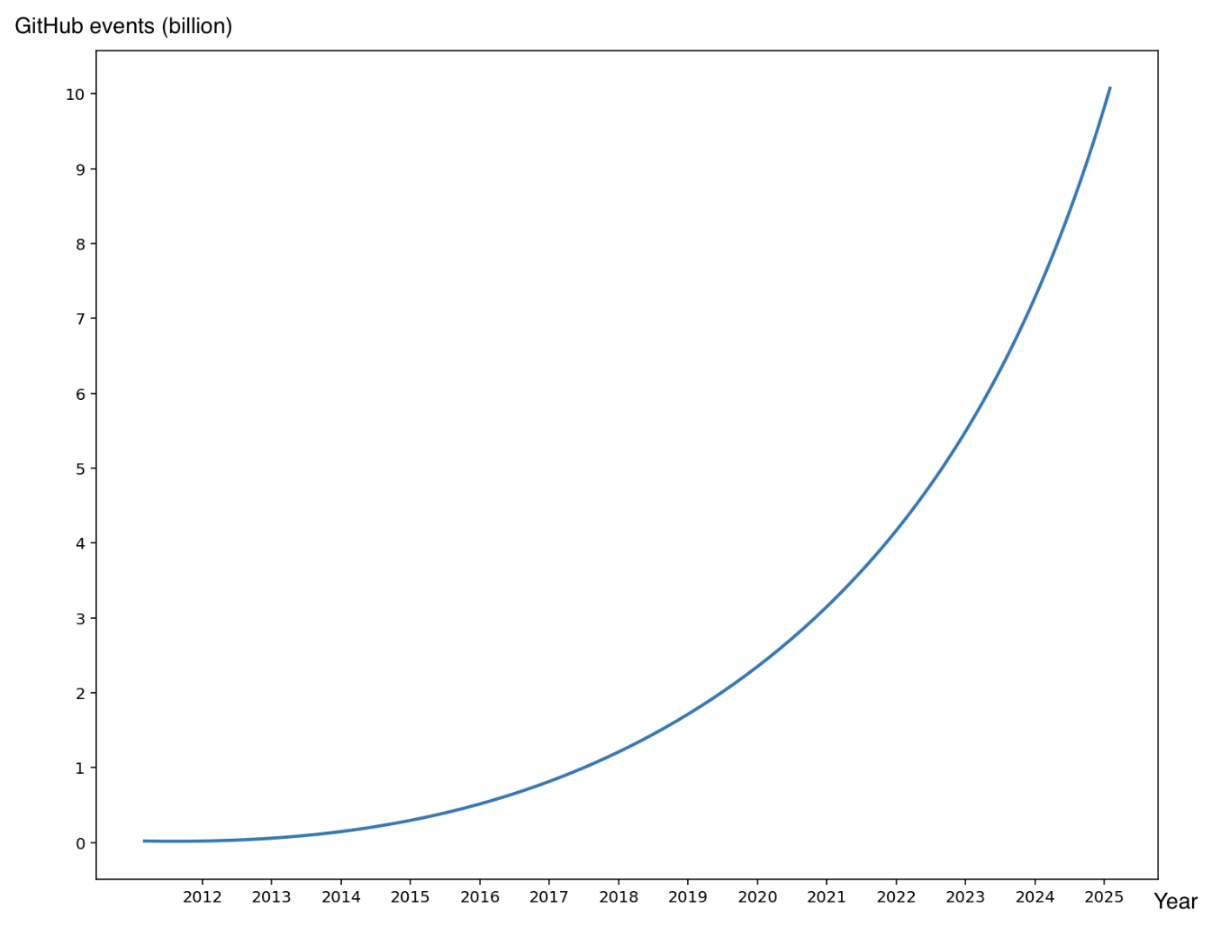 GitHub events will exceed 10 billion in 2025

Can MySQL sharding support such a huge amount of data?​

GitHub uses MySQL as the main storage for all non-git warehouse data. The rapid growth of data volume poses a great challenge to GitHub's high availability. In March 2022, GitHub had 3 service disruptions, each lasting 2-5 hours. The official investigation report shows the MySQL database caused the outages. During peak load periods, the GitHub mysql1 database (the main database cluster in GitHub) load increased. Therefore, database access reached the maximum number of connections. This affected the performance of many GitHub services and features.

In fact, over the past few years GitHub has optimized its databases. For example, it added clusters to support platform growth and partitioned the main database. But these improvements did not fundamentally solve the problem. In the near future, GitHub events will exceed 5 billion, or even 10 billion. Can MySQL sharding support such data surge?

All the analysis data in this article comes from OSS Insight, a tool based on TiDB to analyze and gain insights into GitHub events data.

You can use it to easily get insights about developers and repositories based on billions of GitHub events. You can also get the latest and historical rankings and trends in technical fields.

In this chapter, we will share with you some of the top JavaScript Framework repos(JSF repos) on GitHub in 2021 measured by different metrics including the number of stars, PRs, contributors, countries, regions and so on.

The number of stars is often thought of as a measure of whether a github repository is popular or not. We sort all JavaScript framework repositories from github by the total number of historical stars since 2011. For visualizing the results more intuitively, we show the top 10 open source databases by using an interactive line chart.

In this chapter, we will share with you some of the top low-code development tools repos (LCDT repos) on GitHub in 2021 measured by different metrics including the number of stars, PRs, contributors, countries, regions and so on.

On this page, we will share with you many deep insights into open source databases, such as the database popularity, database contributors, coding vitality, community feedback and so on.

We’ll also share the SQL commands that generate all these analytical results above each chart, so you can use them on your own on TiDB Cloud following this 10-minute tutorial.

In this chapter, we will share with you some of the top programming language repos (PL repos) on GitHub in 2021 measured by different metrics including the number of stars, PRs, contributors, countries, regions and so on.

In this chapter, we will share with you some of the top Web Framework repos (WF repos) on GitHub in 2021 measured by different metrics including the number of stars, PRs, contributors, countries, regions and so on. 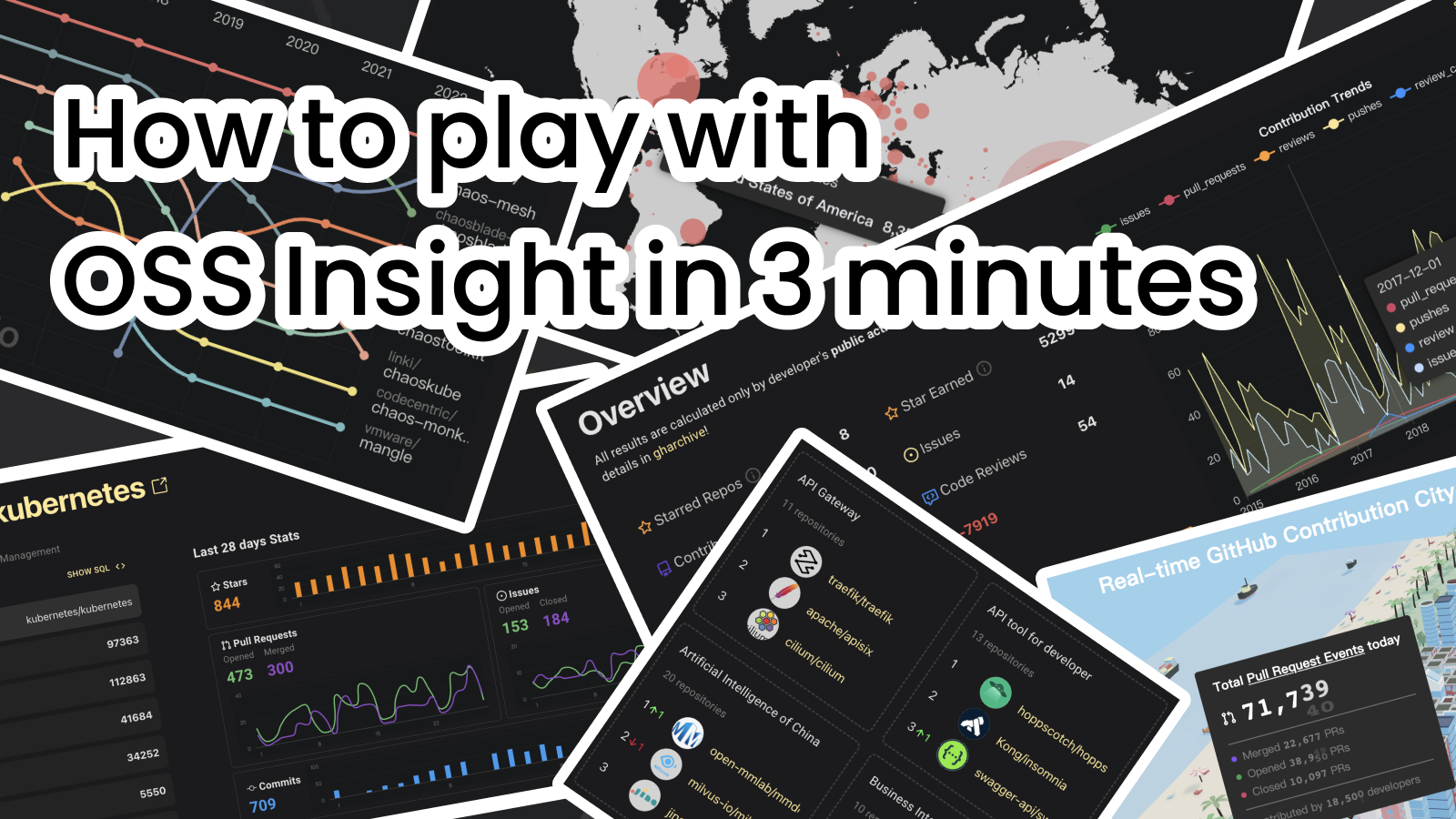